Instead of the way you see them on ABR-1 saddles, with a steep flat angle?

I have been having some problems on my Eastwood Wolf Tribute ( they use the saddles in the first image )
I have a Sitar like rattle sound coming from the high E and sometimes the D. I have narrowed it down to the saddles, since it happens both on open strings and fretted.

To test further, I also took a tiny piece of notebook paper and put it under the string in the slot, which immediately stops it. I also took the string out of the slot and set it next to it, tuned up and again the noise stops. So I do not believe the nut is involved.

This leads me to believe the problem is that slope, In other words I think the rattle is the string vibrating ever so slightly on the rounded slope.

I got in touch with Michael at Eastwood and asked if it was possible to get a set of saddles without the slot in them, so I could do it myself. Unfortunately they don’t sell them like that. I have looked all over for new saddles ( without a slot ) that have the same dimensions, and so far nothing.

I currently have 2 bridges and 2 sets of slotted saddles. Can I take one set and have someone with the tools to grind brass flatten the rounded slope? To me this would eliminate the possibility of the string hitting that spot again, and stop the issue in its tracks.

For those of you who work on guitars and have a lot more knowledge than I currently do, am I going in the right direction? Or is there an easier solution to this, that I just haven’t found yet?

I appreciate the help
Chris

I say that because the slots for the low E, A and D strings all look to be about the same to me, but they shouldn't be. And the difference between the D and G slots is enormous. If the D, G and high E slots are all pretty much the same, I'd say that's the issue. In other words, someone using 2 files to cut slots instead of 6.
LazyLightning72 liked this

#171547  by TI4-1009
Wed Sep 01, 2021 9:11 am
Ha! When I looked at your photos, before reading the text, I thought "to get that great sitar-like sound!" As Bill pointed out- if done incorrectly.
LazyLightning72 liked this
"Do not write so that you can be understood, write so that you cannot be misunderstood." -Epictetus

I don’t know how well it shows on the picture, but the slot is perfectly horizontal.

What files do you recommend I use to correct it? I hate to have a piece of paper under the high E all the time, lol!

Besides, I’m trying to learn all this stuff anyhow, so I might as well go ahead and get them.

Again thanks for the help guys! 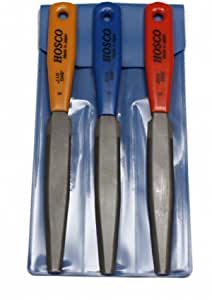 Thanks Bill,
Just so I’m clear, those work on both the saddles and nut?

Also, I play 10s so I assume I need a specific set?

That’s perfect since I was going to ask what to get for nut slots as well.

#171578  by LazyLightning72
Fri Sep 03, 2021 11:33 am
I’m not opposed to getting the set you posted Bill, however I have a store credit at Sweetwater right around the price of this set. Since they unfortunately don’t have the Hosco brand.

Any experience with them, or should I just stick with what you suggested?

#171580  by lbpesq
Fri Sep 03, 2021 2:02 pm
Sorry Chris, never used them or even seen them in person. I suppose almost any decent nut file set will do. I assume you are like me and will be using them occasionally as a hobby rather than manufacturing multiple nuts and saddles, so wearing out isn't really a concern. I do have a question about the Sweetwater set. I wonder if the handle makes it more difficult to see what you are doing. With a standard shaped file, your hand is well back and you can clearly see what the file is doing. These seem to require you to hold the handle above the file rather than behind it, which would seem to block your view as you are actually filing. I read where one of the reviewers on Sweetwater noted this as a problem. I guess the handles just look a little gimmicky to me.

Yes, definitely as a hobby.

I have a LOT to learn about the inner/outer workings, I wish I had learned sooner. You know how the old saying goes. This is my later than never moment.

Is there a general rule of thumb as to the angle you should cut the saddles?

I’m wondering if I should buy a half dozen blank brass saddles to practice on once I get the Hosco files. Then I’ll have an idea of how much pressure is too much and how much is not enough for brass.

#171587  by lbpesq
Sat Sep 04, 2021 4:43 pm
I would just angle gently down from the face. The angle isn’t critical, so long as the face, where the string leaves the saddle, is the high point. Start with minimal pressure, almost just the weight of the file without any added pressure - there is no way to screw things up with too little pressure! I would file with gentle long stokes in one direction, from the face (closest to neck) towards the back (closest to tailpiece). Brass is pretty soft. I’d probably just do 2 or 3 strokes at a time to start, with the string loosened a little and pulled out of the notch. Then seat the string back in the notch, tune and test. Repeat as necessary until the string sounds good without any sitar effect. You’ll get the feel of it as you go along. Practicing on a spare piece of brass first isn’t a bad idea, but not necessary. Just go slow and easy. Like I said before, it’s much easier to remove brass than to add it!