A place to talk about the music of the Grateful Dead
https://www.rukind.com/

So I got my Eastwood Wolf last Thursday, after stringing it I decided to make sure all the pickups worked, etc...

I happened to look down on the bridge, and thought something looked odd.

*In full disclosure, I’ve never had a bridge like this, so it may just be my ignorance.

I tried to compare it to pics on their site, but isn’t this backwards? I loosened the strings to take the pic, that’s why some of the strings aren’t in their slots.

The adjustment screws look in the right position compared to the pics on their site, but the brass pieces look like they are backwards.

by lbpesq
Compared to the old Alembic-style bridge they are emulating, the saddles are definitely backwards. Also, the adjustment screws on the old bridges faced the other way, too, so they would be adjusted from the bottom end as opposed to your current neck end adjustment. So yes, I would say the whole bridge is installed in reverse.

It is hard to tell in the pic, the slots are larger under the high E and get progressively smaller as they work towards the low E.

In every pic I have seen on their site the adjustment screws are positioned like mine is in the picture, that’s what was throwing me off so much. Now I’m second guessing that, and will go back and look at their pictures. Lol!

Anyhow,
I’ll loosen the strings and flip it around.

Thanks a bunch for the help!

You can flip the bridge around but you will have to re-intonate the guitar. A starting point would be the saddle for the low E string should be set back, the A string should be up a little bit, and the D string up a little more, same is true for the G, B and E strings. That is a starting point, it's accounting for the differences in string size and the bridge being tilted slightly toward the low E string. The bridge as it sits right now, the saddles look like they are adjusted but they will be backwards if you flip it.

This is a typical setup ... this has some saddles reversed but it doesn't really matter as long as the intonation is correct. 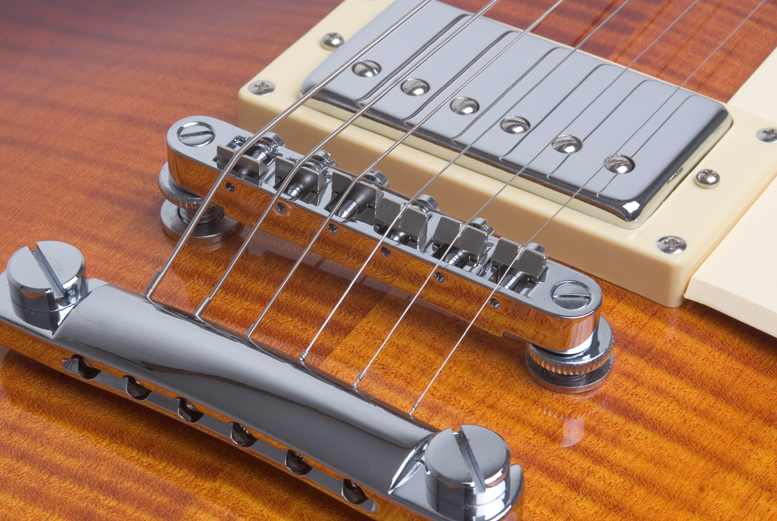 It doesn't really matter which directions the saddles face, but having wider cut saddles on narrower strings is a no-no.

The guitar needs a correct setup and they should pay for that. Or send it back to them. This is guitar building 101. It is not good to put a high E string in a saddle that had a low E string in it before if the saddles were precut for different string widths. Seems like they got that back-asswards, too.

by LazyLightning72
Lol,
Yea I had a feeling the intonation would need adjusting. I got a crash course in it when I bought my 60s CV in 2014. All the saddles on it were perfectly lined up to each other. Took a little time, but I finally figured it out and got it perfect.

by lbpesq
I don’t mean to speak for Eastwood or what they intended. My experience is with old Alembic and Stars bridges. Also, even if the saddles had been slotted incorrectly, I revise my above statement that they would need to be replaced ... they would only need to be removed from the bridge and repositioned. But, from your description, it seems clear all you need to do is reverse the entire bridge and then adjust action and intonation.

The above pic with the chrome bridge where the poster claims it doesn’t matter which way the saddles face is correct for his pictured bridge, but not for your bridge as the saddles are shaped differently. As your saddles face in the pic, I wouldn’t be surprised if you get a little sitar effect on some of the strings.

by Hitime
Don't be surprised if the obel is wired backwards also,I tried one and it was ring send and tip return ,you will have to swap send and return cables on your obel junction box. How do yo like your new guitar so far? I hope it works out for you.

by LazyLightning72
So I got the skinny on what happened, and it was not on Eastwood at all.

My wife saw me messing around with it turning it around and saw on my screen the post I made. It was so funny I couldn’t get mad at her. After I got it out of the box, I set it on one of my stands to string. Well I had stepped out of the room for a few minutes. She decided it was a good idea to sweep the tile floor and gently bumped into the stand.

So she comes up to me and says, “is there something wrong with your new guitar”, but it was the puss in boots way she asked and looked that clued me in. I was like yea they sent the bridge turned around, and I’m making sure which way it went with some guys on a forum.

Then she says “can it be fixed?”, I was just like what did you do.

She told me when she bumped into it, the saddle fell off and she panicked. Somehow, she figured out where it came off of and slipped it back on. So not knowing this I assumed it was correct still, until a bit later when I finally noticed it.

Long story short, keep your wives away from your gear if your working on it, lol!

I flipped it around and got it back in tune. I’ll see if and how much the intonation needs to be adjusted later this evening, when she’s in bed.

Anyhow, thanks for the help guys!

Hitime wrote: ↑
Sun Aug 09, 2020 12:46 pm
Don't be surprised if the obel is wired backwards also,I tried one and it was ring send and tip return ,you will have to swap send and return cables on your obel junction box. How do yo like your new guitar so far? I hope it works out for you.

I need to get a couple things this week before I can try out the OBEL.

I love the guitar, as far as build quality it’s exceeded my expectations, which were high. I haven’t had a real sit down with it, mostly due to the above. That’s going to change tonight though. Going to sit down, do any intonation adjustments if needed and just play for a few hours.
All times are UTC-07:00
Page 1 of 1
Powered by phpBB® Forum Software © phpBB Group
https://www.phpbb.com/