#167683  by search4sound
Thu Jul 23, 2020 10:25 pm
Hey guys, long time, hope you are all doing OK... I just rewired my OBEL and noticed when my guitar's loop switch is ON that with the stereo cable unplugged from the guitar the audio signal is still coming out the mono cable. Anyone see this behavior?

Normally the obvious solution is to either turn the loop switch OFF, or else plug in the stereo cable and use it as designed. But I am investigating some squealing I sometimes get in my ampless pedalboard which suggests the signal is going through some funky pathways unless there are buffers (or buffered pedals) in the right places to prevent the squeal.

The TL;DR might be this: would an output coupling cap at the end of the buffer help to block audio from running backwards into the output?

OK, here are the details (hopefully there are some sharp electronics gearheads still on this board). .. I've wired the guitar according to the Tiger schematic where the pickup selector always goes to the buffer input, then the buffer output goes to the DPDT loop switch like this:

Volume sweeps nicely over full range. There are 2 single coil pups and one HB pup, they each have their own tone cap and pot (SC's each have a 250k pot (actually ~242k), HB has a 500k pot (actually ~490k), all before the pickup selector output.

[Note: Turning the fx loop switch OFF disconnects the fx loop TRS jack from the buffer out and the volume pot. In this case the tip and ring do not go to ground and the resistance between tip and ring is at least 390k (probably more - not sure why it wasn't immediately higher or why the meter kept reading higher and higher until I got tired and stopped measuring, possibly running backward from ground through tone caps?).]

So how can it be that the audio signal is getting from the buffer out to the volume pot when the fx loop switch is ON but the stereo fx loop cable is disconnected - could it be running out the buffers 10k resistor to ground, then from ground up right terminal of the volume pot and then out the volume pot wiper? Or is it something more basic like crosstalk within the TRS jack (it has been re-soldered for different installations; I've ordered a replacement).

Before rewiring the guitar I first installed the OBEL without a buffer, got a squeal in my pedalboard loop, then installed a non-Tiger buffer and the squeal went away pretty much completely. But I had numerous mods to make and so I routed space for batteries, fully shielded the cavity, replaced the volume and tone pots, and installed a TIger-based buffer I built, and now I get the squeal a lot when I flip the fx loop switch OFF.

Clearly I could take a look at potential ground loops and misaligned wire strands, but wanted to check if anyone has been down this road before where the buffer did not eliminate squeals elsewhere in their signal chain. I used a star arrangement to connect all grounds to a common spot (pickup selector switch ground screw). The cavity is fully conductive (used aluminum tape) and there is an aluminum shield under the pickguard (I know, peeps like copper and conductive paint, I used what I had on hand). Maybe with the pickup switch and pots already pressed on the shield I didn't need some of the ground wires.

Any other thoughts or suggestions? As I said above, I'm wondering if adding a polarized coupling cap at the end of the buffer help to block audio from running backwards into the output.

#167684  by Jon S.
Fri Jul 24, 2020 8:29 am
>> Before rewiring the guitar I first installed the OBEL without a buffer, got a squeal in my pedalboard loop, then installed a non-Tiger buffer and the squeal went away pretty much completely.

This point, in and of itself, is worth emphasizing for folks adding OBELs in the future. I went through minor hell, when adding an OBEL to my Reverend Avenger, with such squealing. One by one, I eliminated every possible component from the signal path until I had only the bare jacks and one pickup left [see photo below] and still had the squealing. Adding my buffer (a CAE CB1) immediately eliminated the squealing entirely.

I'm not sure how to advise you on your specific issue - others will surely have more knowledge than I on it. But is your buffer wired such that it's the very first component your signal sees always upon leaving your pickups? 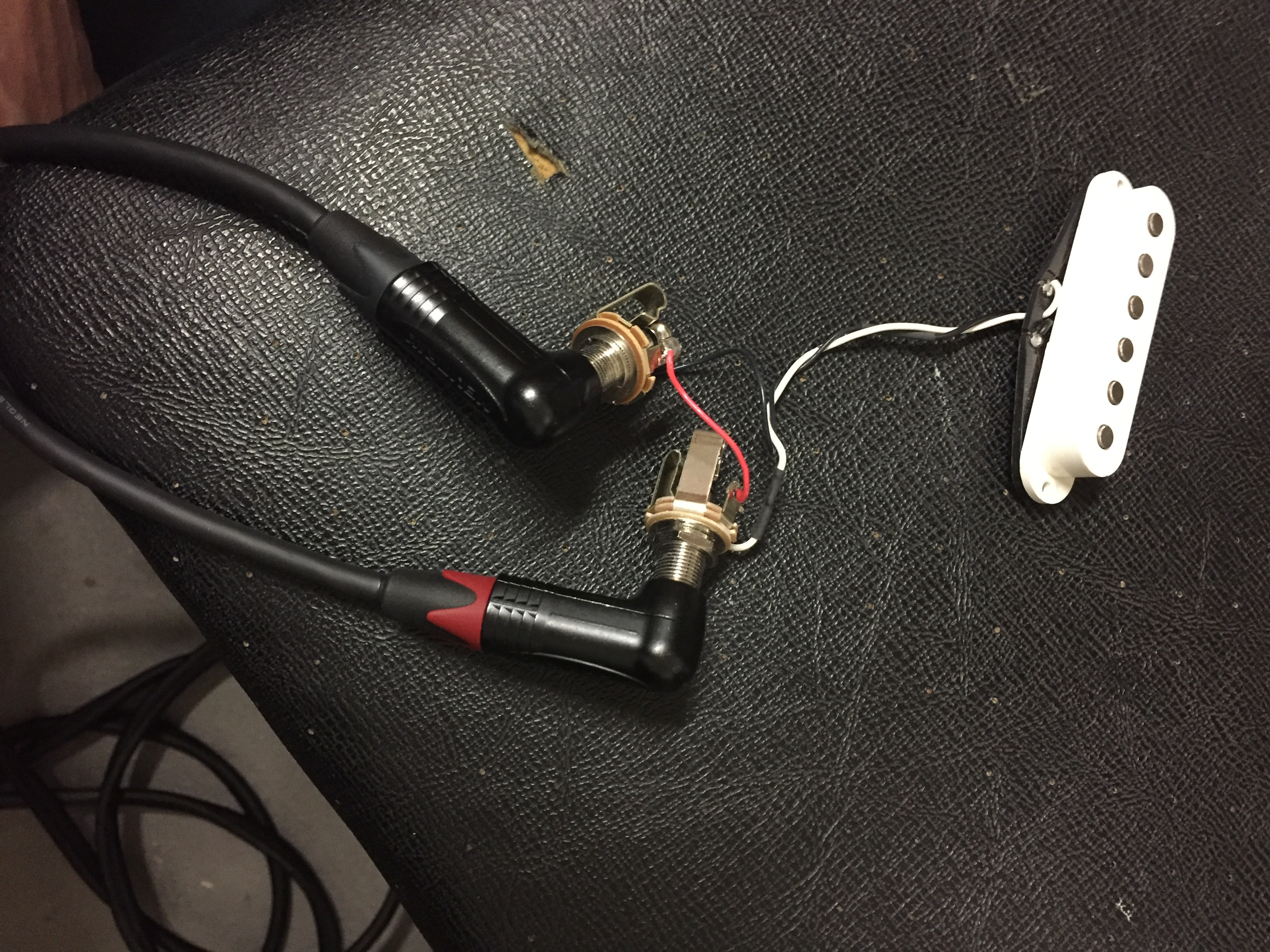 #167685  by search4sound
Fri Jul 24, 2020 11:33 am
Thanks - awesome to hear feedback like this! Yes hot out from pickup selector goes directly to buffer in. Individual pickups on pickup selector inputs run to their tone cap and then tone pot to ground, that's all.

I think my coupling cap question was probably dumb as I think it would only block DC current and anyway the signal appears to be running down the 10k resistor to ground and then over and up the reverse ground path to the volume pot, so the only place a component could block this would be between the volume pot and ground (would a low voltage diode work?).

One thing I am trying is isolating the volume pot ground terminal by running it to the sleeve of the fx loop trs jack (with no other contact between sleeve and ground except via the external stereo cable shielding going to ground on the pedalboard side. The shield of the mono TRS jack is still connected to the guitar ground network. I'll report my findings. -N

>> Sorry to see Ned having issue with his OBEL. I don't remember the system well enough to advise. The troubleshooting advice of isolating down to the simplest path is usually what I do after checking continuity in the ground path and signal path.
Phil Jacoby
www.philtone.com

It was this strategy that led us, with my Reverend Avenger pictured above, down to just the pickup and jacks. When the squealing continued then still, we at least knew it was intrinsic to the circuit itself, not any specific component in it, leading us to add the buffer to solve the issue.
/ '-- '(
< [] []////////|:::) https://soundcloud.com/gratefuljon
\_.--.(

I've seen how buffers overcome this issue, but I wonder what it is about buffers that solves this - is it the isolation between input and output, or is it the stronger signal pushing AC in a forward direction and preventing back-travel?

It didn't work to move the vol pot ground to the sleeve of the fx loop trs jack (mono cable still passes signal when fx loop is ON stereo cableis removed - that wouldn't be a solution anyway as I want to be able to use mono cable only for non-obel applications and need the vol pot to run to ground).

I probably just need to debug my buffer, and failing that can go back to my commercial buffer.

#167732  by search4sound
Fri Jul 31, 2020 2:52 pm
I resolved my issue, thought I'd report the solution... I found two different adjustments each of which independently resolved my issue. The first was to run my buffer with just one 9v battery. I was running with two rechargeables in series for a 16v supply (for headroom and less worry if voltage dips). This worked for me before, may be something about the new buffer or the presence in my original wiring of a pulldown resistor connected to the switch output where it feeds in to the 25k vol pot.

The other solution was to change the switch wiring of the DPDT switch so that the fx send is grounded when the fx loop is turned off. There are other options such as pulldown resistors. Here's an article that discusses these options, albeit in the context of pedal switches:

Pretty psyched about my setup. FYI, I have a Schaller 5-way superswitch wired in HSS2 mode where in position 1 the bridge HB is in series, in position 2 one coil of bridge HB combines with middle coil in parallel, pos 3 middle SC, pos 4 middle and neck in parallel, and pos 5 neck SC (SC's are from a divided Super II with middle wired with RWRP). Two dual gang 250k/500k knurled tone pots so bridge HB has 500k, middle and neck each have their own 250k variable resistor for tone, and the 500k gang on pot used for middle tone is used for a high impedance volume control, with a DPDT switch allowing me to bypass buffer and fx loop (yeah it does limit use of of middle pickup tone control but I don't need much range for volume or tone in this context and can use neck or bridge pickups if I want high volume with tone rolled off), or just go back to buffered mode where I use the 25k pot for volume and I can roll down tone on middle with no impact on volume. A lot of functionality with just the 3 strat knobs (plus 5-way and two DPDT switches).
Jon S. liked this